Which Varicose Vein Procedure Is Best? Which Is Right for Me? 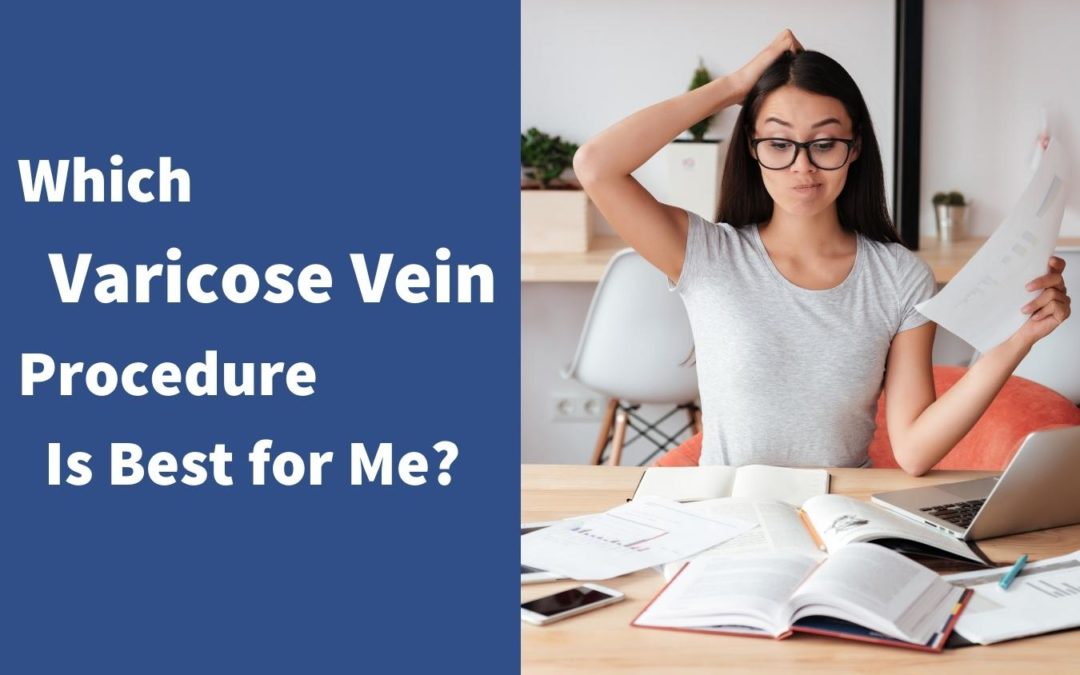 If you’re just finding out about varicose veins, you might be wondering why there are so many procedures. Radiofrequency ablations, laser ablation, sclerotherapy, and surgery are the best-known procedures. But if all you know is that you have a problem with your veins, which of these four should you pick?

Before you see an expert, it’s a good idea to learn about what the options are.

The oldest method to deal with unhealthy veins was to surgically remove them, known as “vein stripping”. This technique has been used since ancient times. A similar procedure is vein ligation, where the vein is cut at several places and tied off to prevent blood flow. These methods fix the poor blood flow by redirecting it to healthy veins, but they have several risks, including scarring, infection, and bleeding. Sometimes they only work temporarily, and they can make deep vein problems worse if not diagnosed properly.

Surgeries are naturally the most complicated option. They can’t be done in a doctor’s office, and require a lot more planning.

These methods are still used in some cases, but are not the preferred ways to treat varicose veins. They’re also not suitable for people who are pregnant, have a history of venous issues, or other medical issues.

A more modern treatment involves injecting a suitable chemical into the vein, sealing it off and dissipating it without a trace. This eventually turns the vein into scar tissue, which fades away. This is safer than surgery, with only minor side effects that may happen like bruising and irritation, and only rare complications that can be easily treated, and dissipate in a short time. Also unlike surgery, sclerotherapy can be performed as an outpatient procedure.

This is used for small spider or varicose veins, so it will be clear to your physician when this is the best choice.

An ablation is when part of something is slowly removed. For veins, that means their walls are carefully affected in a way that causes them to close off.

One such technique is called “radiofrequency ablation” (RFA). It’s also called an “endovenous radiofrequency ablation”, which means that it’s a procedure that’s performed from inside the vein. With topical anesthetic and a small incision, a small catheter tube is inserted and fed along the length of the vein, and anesthetic is applied along it as well. This not only prevents pain, but compresses the vein to avoid the procedure affecting anything else nearby. Once the procedure has started, the catheter heats up the vein, turning it into scar tissue and closing it carefully. Just like the other techniques, this redirects blood flow to healthier veins, avoiding the blood flow issues.

A second technique is called “endovenous laser therapy”, which is very similar, but uses laser technology to heat the vein instead of radio waves.

Side effects are mild or rare, and either resolve themselves in a few days, or can be easily treated. Like sclerotherapy, there’s no need to go to a hospital to get this procedure done. It doesn’t take long, and you’ll have almost immediate relief with minimal downtime.

Ultrasound technology is used to look at the vein under the skin during these procedures, which helps the physicians to make sure the vein has properly sealed. Compression socks also help recovery and prevention, due to being carefully calibrated to apply pressure at just the right parts of your legs to improve blood flow.

Thankfully you don’t have to make the decision by yourself. A vein physician will study your veins and medical history to figure out what the best option is for you. If you’re ready for your consultation, contact Dr. Imami.

Your safety is our highest priority. Staff and patients are required to wear masks unless vaccinated. We also use UV filtering to keep our air sterile, disinfect surfaces, and of course wash our hands!